Prime Minister Sheikh Hasina's government set up the International Crimes Tribunal two years ago to investigate human-rights abuses committed during a civil war that led to Bangladesh's independence in 1971. 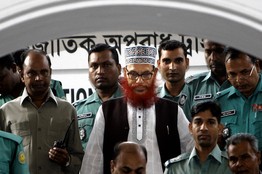 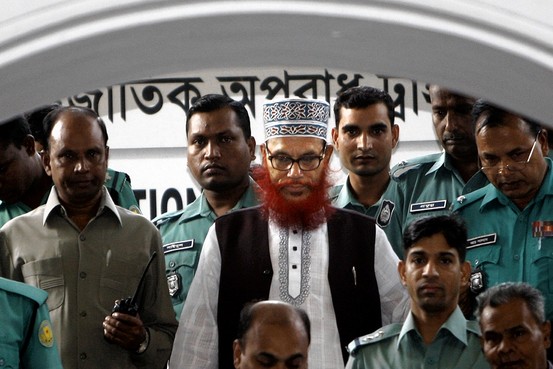 Delwar Hossain Sayeedi, center, an Islamist whose case is before the war-crimes tribunal, in Dhaka Oct. 3.

The government promised that the tribunal, which has the power to hand down death sentences, would adhere to international standards. But Bangladesh's opposition parties claim the government has politicized the process. Most of the 10 people on trial are members of Jamaat-e-Islami, an Islamist political party allied with the main opposition Bangladesh Nationalist Party.

The controversy around the tribunal has sown doubt around the credibility of the process, threatening to derail it and deepen political rifts rather than provide the intended closure to the civil-war turmoil in which hundreds of thousands died, many killed by Islamist militia who opposed Bangladesh, then part of Pakistan, becoming a separate country.

The issue is coming to a head as the first case—against Delwar Hossain Sayeedi, a Jamaat-e-Islami leader—was expected to conclude this month. The case now appears to have been thrown in disarray amid the allegations of interference.

Supporters of the trials say Bangladesh, one of the world's poorest and most politically unstable nations, needs a locally conducted process to bring justice to victims' families.

Prime Minister Hasina earlier this month said in a speech: "We will certainly complete the trial of the war criminals to free the nation from stigma," according to the state-run news service.

The government, led by Ms. Hasina's Awami League, maintains the trials are fair. "We're not going to try anyone for political reasons," said Shafique Ahmed, Bangladesh's law minister, in an interview Wednesday. "We're going to try them for genocide. It will be a model for the entire world."

The government's opponents have based their claims that the trials are biased on a series of conversations that appear to be between the former chairman of the original tribunal, Mohammed Nizamul Huq, and a Bangladeshi human-rights lawyer based in Brussels, Ahmed Ziauddin. (A second tribunal to hear cases has since been established.)

The Wall Street Journal reviewed copies of transcripts of six conversations purported to be between Mr. Huq and Mr. Ziauddin carried out over Skype between August and October. The contents of the conversations have also been reprinted in transcripts by a Bangladeshi newspaper and are available online.

Neither man has publicly commented on the authenticity of the conversation transcripts. Neither could be reached for comment.

Mr. Huq resigned last week from the tribunal but remains a Supreme Court judge. In a statement, released through the Law Ministry, he denied wrongdoing and said he had stepped down to put an end to the controversy sparked by the transcripts.

The transcripts suggest that Mr. Ziauddin, despite having no formal, declared position in the war-crimes tribunal, plays a key role in the process, including helping to structure judgments and coordinating with the prosecution. The transcripts show the two men commenting about pressure from the government for a quick judgment.

In one conversation, in a recorded file labeled Sept. 10, the person identified as Mr. Ziauddin tells the person thought to be Mr. Huq that he is working on the "sketch" of how a judgment in the case of Mr. Sayeedi might look.

Mr. Sayeedi is charged with murder, rape and arson during the 1971 violence. He denies wrongdoing and has pleaded not guilty.

"We have prepared a rough structure" of Mr. Sayeedi's judgment, the person believed to be Mr. Ziauddin said, according to another recording. "Once the structure is ready, the writing will be easy."

That conversation is in a recorded file dated Oct. 14, more than a month before Mr. Sayeedi's defense team began its closing arguments at the tribunal. The verdict in Mr. Sayeedi's case, the first by the tribunal, had been expected later this month.

In other conversations, the two people grumble about pressure from unnamed government officials to deliver verdicts quickly. The tribunal's proceedings are supposed to be independent of such interference.The two men complain about how they cannot deliver 500-page verdicts as quickly as the government is demanding. "In no circumstances will it be possible to conform to their time frame," the person believed to be Mr. Ziauddin, the human-rights lawyer, said.

In another tape, in a recording labeled Sept. 11, the person identified as Mr. Ziauddin complains to the judge about a prosecutor who took action "without informing us."

Speaking about Mr. Ziauddin's role in the proceedings, Mr. Ahmed, the law minister, said the lawyer and the judge discussed only procedural matters and not information related to the merits of the case. He said the tribunal will press ahead with all its cases.

Defense lawyers for Ghulam Azam, Jamaat-e-Islami's former chief, another of the 10 defendants, on Wednesday filed for a retrial because of the alleged taped conversations. Lawyers for Mr. Sayeedi said they were also preparing to file for a retrial. The tribunal is expected to decide on the filings next week.

Shamsher Mubin Chowdhury, a leader with the opposition BNP, said the tapes show the war-crimes tribunal isn't independent and should be disbanded. Mr. Chowdhury claimed there are members of the ruling Awami League who committed crimes in 1971 but aren't facing charges.

"What is happening is a political trial," he said. Some lawyers not involved in the tribunal said that Mr. Ziauddin's alleged role in advising Mr. Huq might not have been improper but should have been disclosed to the court.

The transcripts have reignited a debate about whether developing countries like Bangladesh are able to conduct impartial war-crimes tribunals or should turn to international bodies such as the International Criminal Court in The Hague.

A U.N.-backed tribunal in Cambodia, where millions died during the Khmer Rouge regime of the 1970s, has sentenced only one person despite years of proceedings, with human-rights groups alleging political interference. The U.S. and others this year have criticized Sri Lanka's investigation into mass killings at the end of its 26-year civil war in 2009 for allegedly whitewashing abuses by government troops. The Sri Lankan government said its probe was fair.

In setting up the tribunal, Bangladesh's government was keen to show it could measure up to international standards, seeking the advice of international legal experts. But Stephen Rapp, the U.S. ambassador-at-large for war crimes, complained in November 2011 on a visit to Bangladesh that many of his earlier recommendations for the tribunal had been ignored.

Mr. Rapp raised concerns ranging from the need for better witness protection to the difficulty the public faced in attending the hearings. Mr. Ahmed, the law minister, said in the interview Wednesday that Mr. Rapp's criticisms were unfair and that witnesses have decent protection.

Human Rights Watch, the New-York based nonprofit group, last week called for a retrial in the case of Mr. Sayeedi, pointing out that after Mr. Huq's resignation none of the three judges on the panel now hearing his case have been present throughout the proceedings.

One of the judges was transferred in March to a different war-crimes trial. A second judge resigned in August, citing health problems. The government says the statute that governs the tribunal allows for the replacement of judges.

The tribunal last week issued an order banning newspapers from carrying the transcripts of the phone conversations or articles on the matter. Mahmudur Rahman, editor of Amar Desh, a Bangladeshi-language newspaper that published the transcripts, said Wednesday he has spent the past seven days in his office to avoid arrest.

Much of the taped conversation deals with the need to reassure the international community that the trials are being conducted by international standards.

"We cannot adopt the traditional Bangladeshi way here," the person identified as Mr. Ziauddin, the human-rights lawyer, says at one point. The World Justice Project, a U.S.-based nonprofit group, said in a report released last month that Bangladesh's courts are "extremely inefficient and corrupt."

But in another tape, in a recording labeled Sept. 6, the person thought to be Mr. Huq complains about a judge hearing a different case before the tribunal for being "too inclined to international standards." The judge, the other man replies, should be "removed from there."

Mr. Ahmed, the law minister, said he didn't know whether the tribunal would hand down Mr. Sayeedi's verdict this month, as earlier expected. "It's difficult to say," he said.

Write to Tom Wright at tom.wright@wsj.com

A version of this article appeared December 21, 2012, on page A15 in the U.S. edition of The Wall Street Journal, with the headline: Bangladesh War Tribunal in Disarray.

Published by Alamgirkingpin
<< Hasina sieht alles rosig an British House of Lords and... >>